Discover the augmented reality exhibition by Jam Sutton using the free app on iOS and Android.

Jam Sutton welcomes virtual visitors to ‘Staring into the Abyss’, a show featuring new artworks created in 2020. Displayed in an augmented reality installation, the show is accessible to the public in any location.

Follow these instructions to use the Augmented Reality app.

Download the ‘Jam Sutton Studio’ app on either the Apple App Store for iOS, or the Google Play store for Android devices.

Select ‘Start’ on the app home screen to begin using the app. This will open the camera view.

1. Select surface mode. (Bottom left of camera view.)
2. Scan the camera over a large floor area. (Ensure there is sufficient light on surface.)
3. Select the tick icon to place the exhibition ‘Staring into the Abyss’.
5. Wait as app loads and processes. (This can take a few minutes depending on connection.)
6. You can now walk around the exhibition.

‘Staring into the Abyss’

The show features four fragmented sculptures, created using 3d scanning processes of human subjects. The works are fabricated using 3d printing and traditional hand-finished casting techniques in Carrara marble, as a dialogue juxtaposing contemporary and classical processes. The large scale work ‘Figures under tension (Staring into the Abyss)’ is a towering structure composted of fragmented bodies, almost as if relics of sculpture are stacked to create a tower of forms subverting gravity. ‘Four fragmented reclining figures, shifting form’ cannibalises, slices, cuts and reforms four figures to create an abstract fluid mass of intersecting limbs and arching torsos. Classical mythology is referenced in ‘Four fragmented seated figures, a bird of prey and a rock’, inspired by the Greek myth of Ganymede whilst suggesting dynamism and movement from the intersecting modular fragments.

"I’ve always been drawn to ruins, derelict spaces and fragments of sculpture. It’s nostalgic; it’s about time, mortality, human history, fragility of the body, melancholy. The decay is poetic, in my work the decay is created by misalignments and glitches in the technological capture of my subject, creating cracks in the surface which reference antiquity but also fragmented human existence. I like the idea that marks from the creation of the sculpture are preserved, the same way clay sculptures have finger prints and tool marks. The glitches on the surface tell a story about the way my work is formed."

“I wanted to include artificial intelligence as a tool in my work, abstracting human identity by using a machine process. I produced thousands of images of my new sculptures to train an artificial intelligence neural network. Neural networks are computing systems that operate in a similar way to biological brains. I fed my source images into the AI network and trained the system using my work as a data set. The AI neural network then created completely new images from its learning which I use as elements in large compositions.”

“I like to think of the AI elements as shadows of the figures, they are fluid and organic, genderless and grapple with the masculine forms within the work.”

Classical ascension and hell paintings are referenced in ‘Today’s the day that I become the sky’ & ‘The great divide is crossed for you, by me’ (these two titles reference the KatieJane Garside/Queenadreena song ‘For I am the Way’) and ‘Bitten by the decorated statues, there was nothing glistening as temples do, there was chaos’. The dizzying compositions of figures create a feeling of anxiety, tension and beauty. The fragmentation of the forms and chaotic compositions blur the lines between figurative and abstract representations of the subject. The sculptural figures in the centre of the compositions are suspended in what seems to be either a falling or rising motion, creating a surreal scene which portrays movement and a sense of sublimity.

"I want to create impressions of figures, casting a representation of my subject as a digital shell, cracked and imperfect by the passing of time and movement. I’m attempting to capture what it is to be human and freezing it."

Sutton’s work explores the space between technology and antiquity, creating pieces which are rooted in the ‘now’ (using the device of modern attire as a contemporary anchor) whilst simultaneously reacting to the past. Sutton sees the sculpture process as capturing shells of a figure. He’s capturing forms of his subjects but also pausing and preserving time.

The physical process of capturing the subject is almost a meditative experience. Keeping perfectly still for a period of time is difficult, the sitter becomes aware of their body, pressure points, pose, bones, flesh. The resulting work captures an essence of being, immortalised and suspended in a digital and physical space.

‘Staring into the Abyss’ is now available to visit in augmented reality. The ‘Jam Sutton Studio’ app is an Augmented Reality exhibition space, available for free download on the Apple App Store for iOS and Google Play for Android devices. 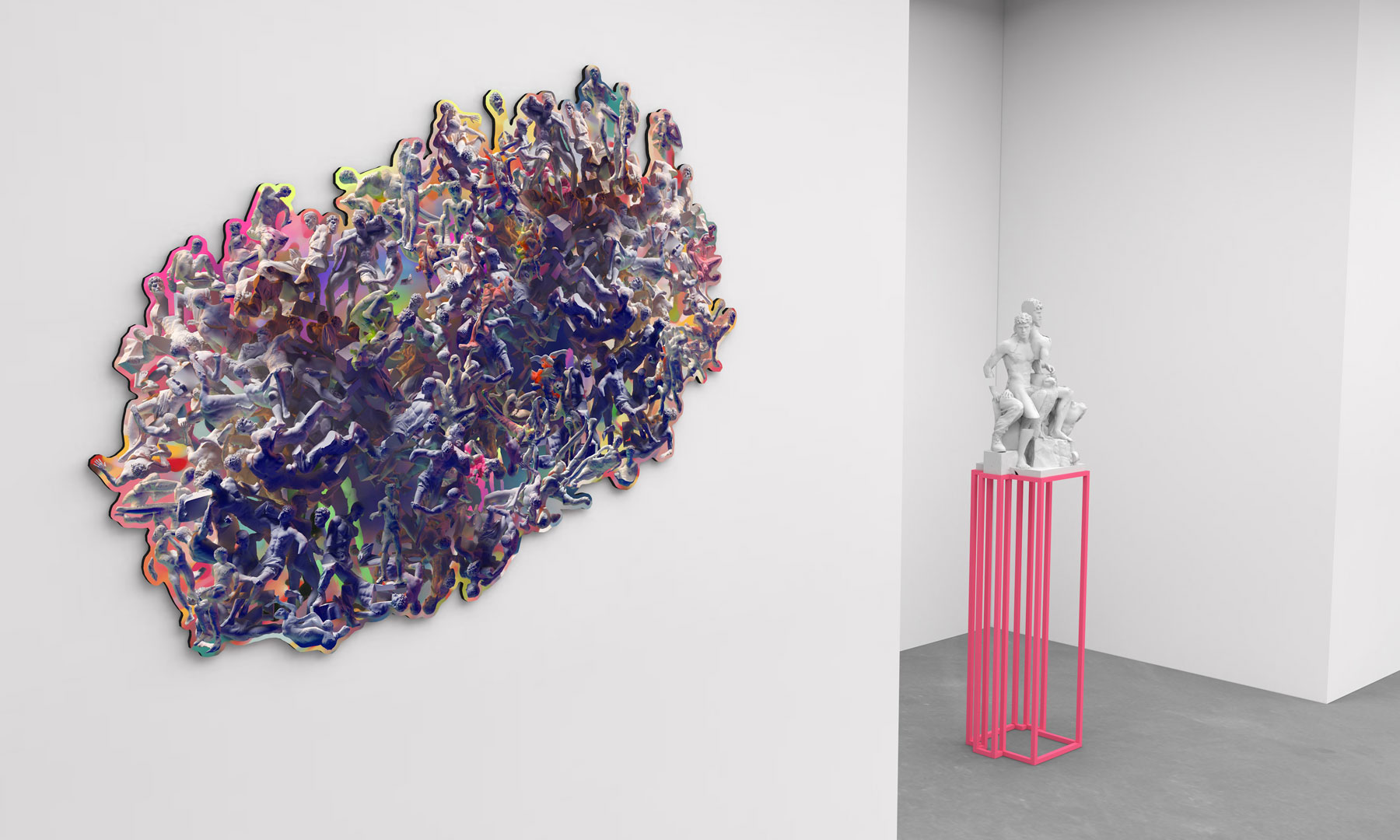 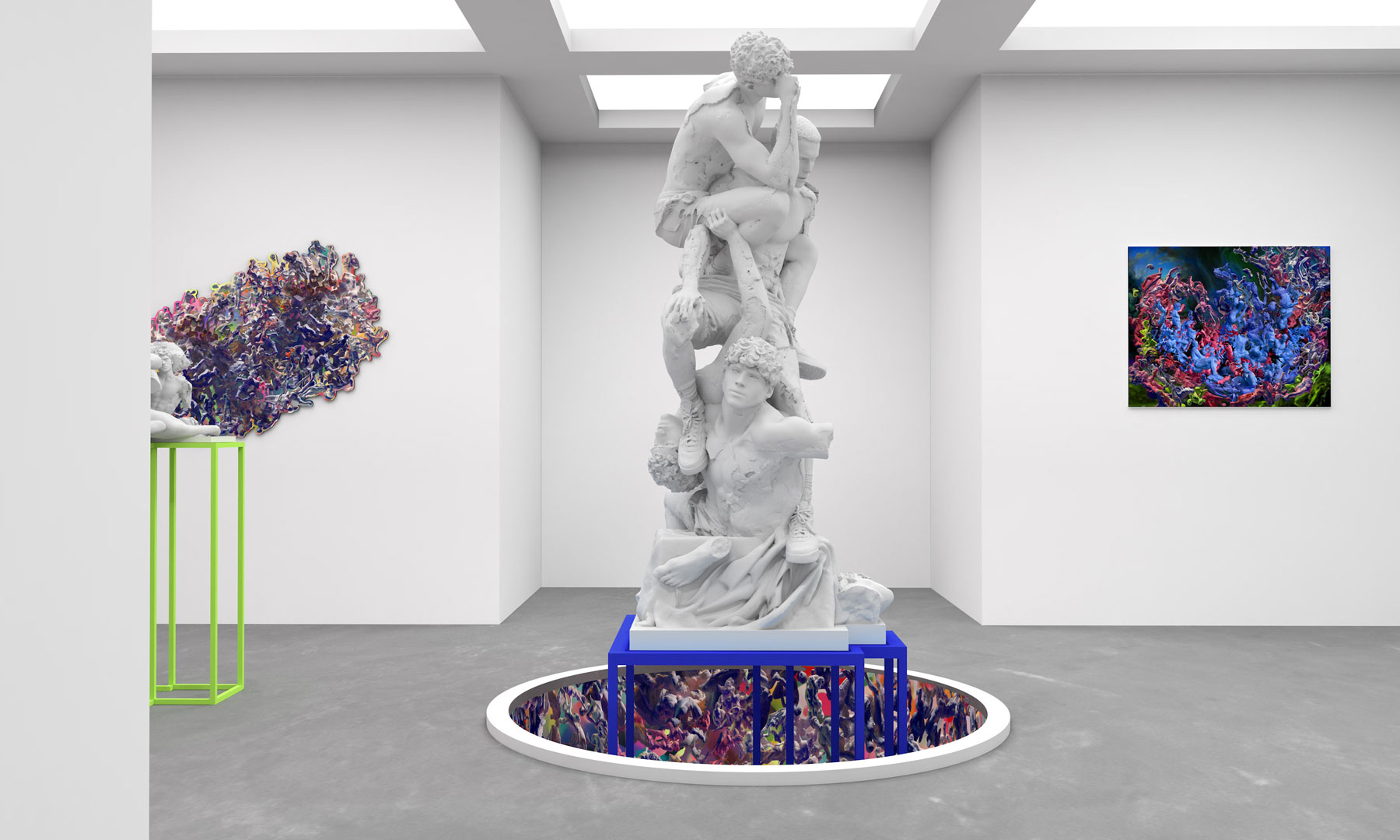 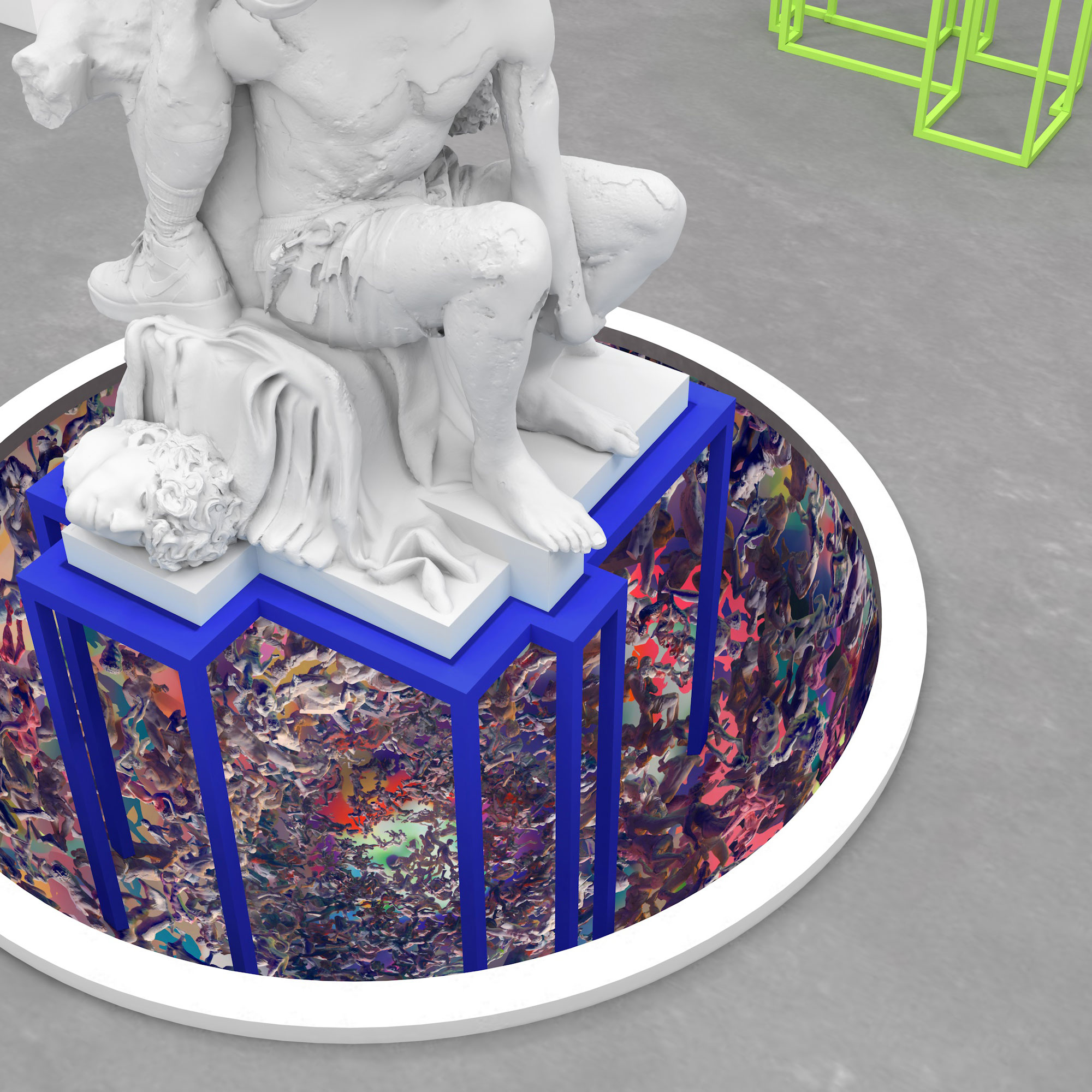 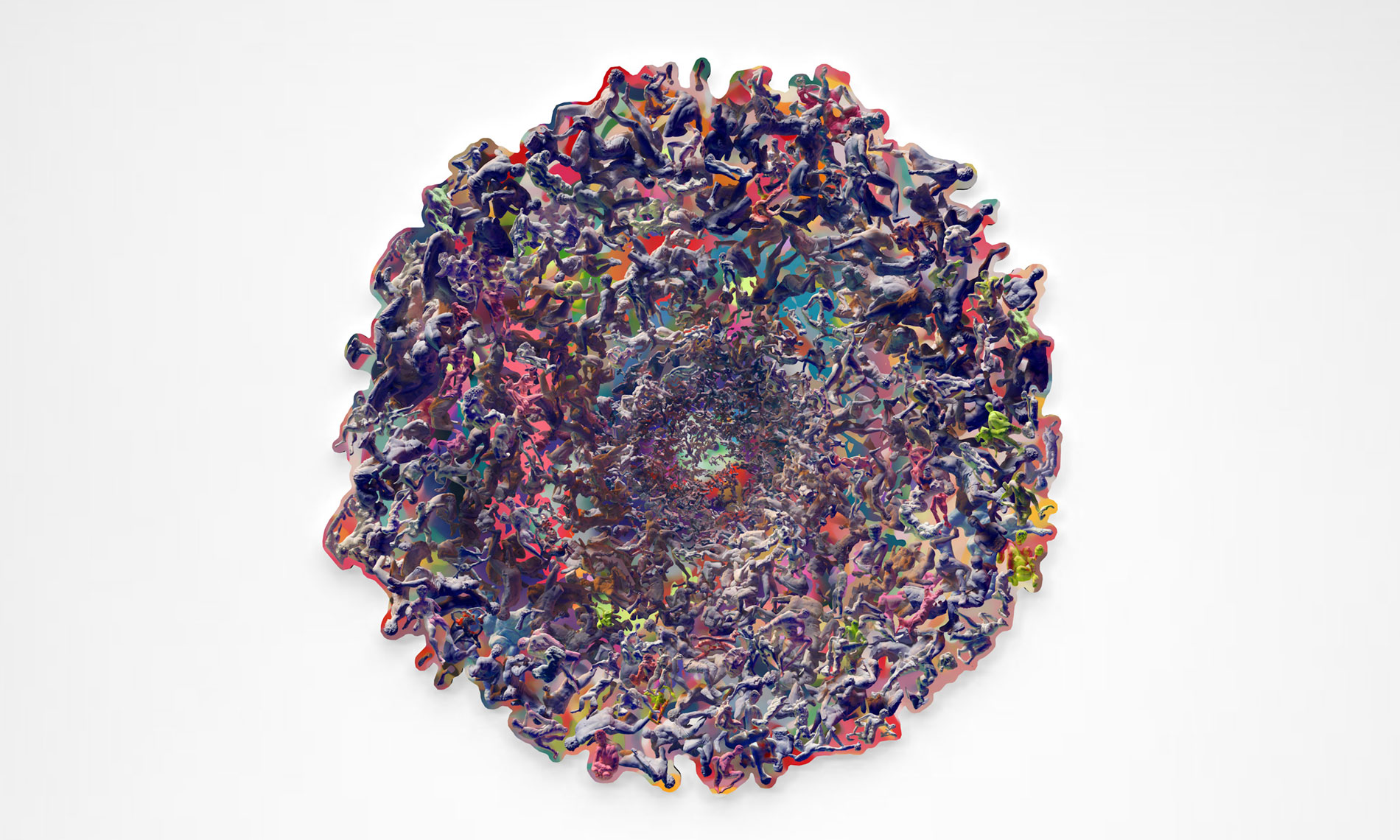 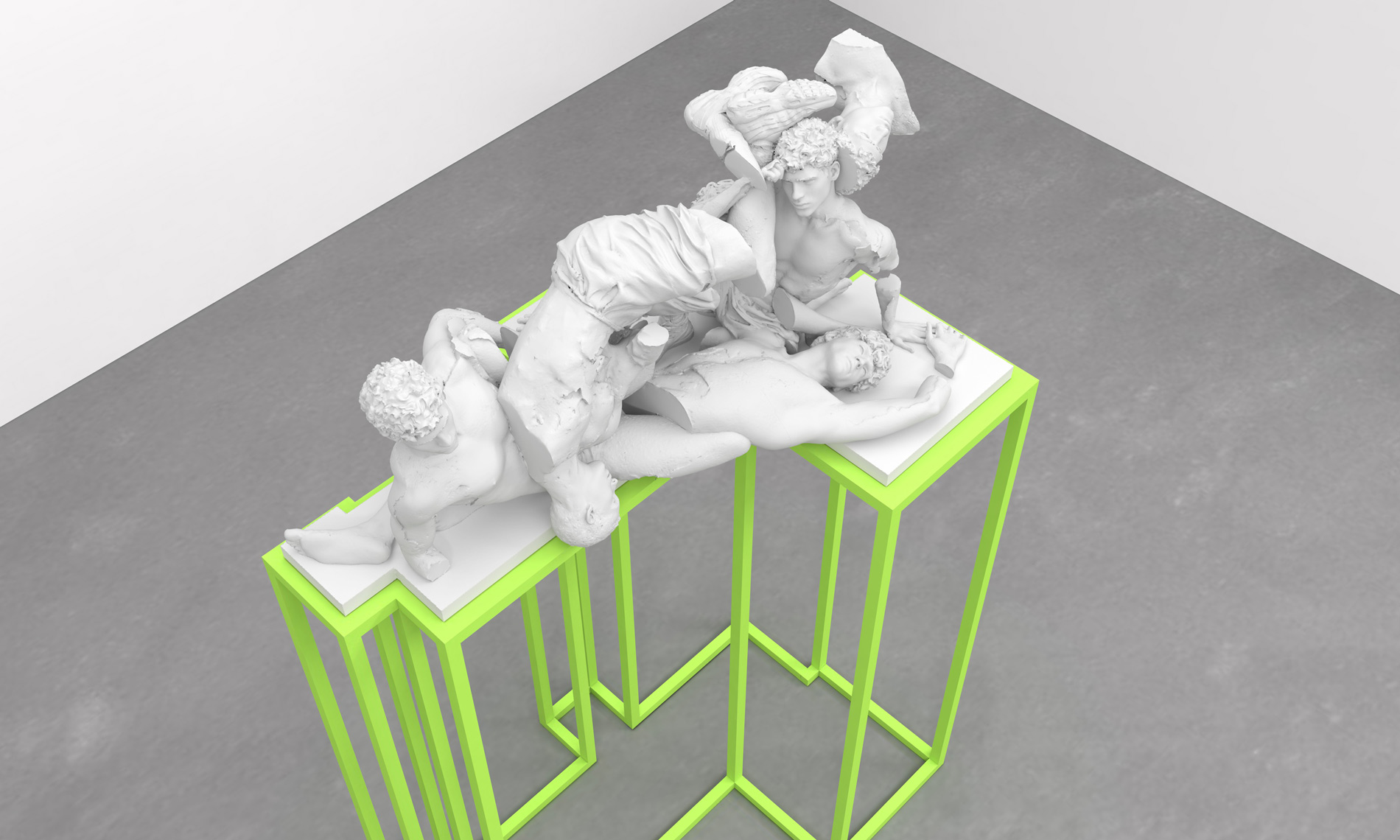 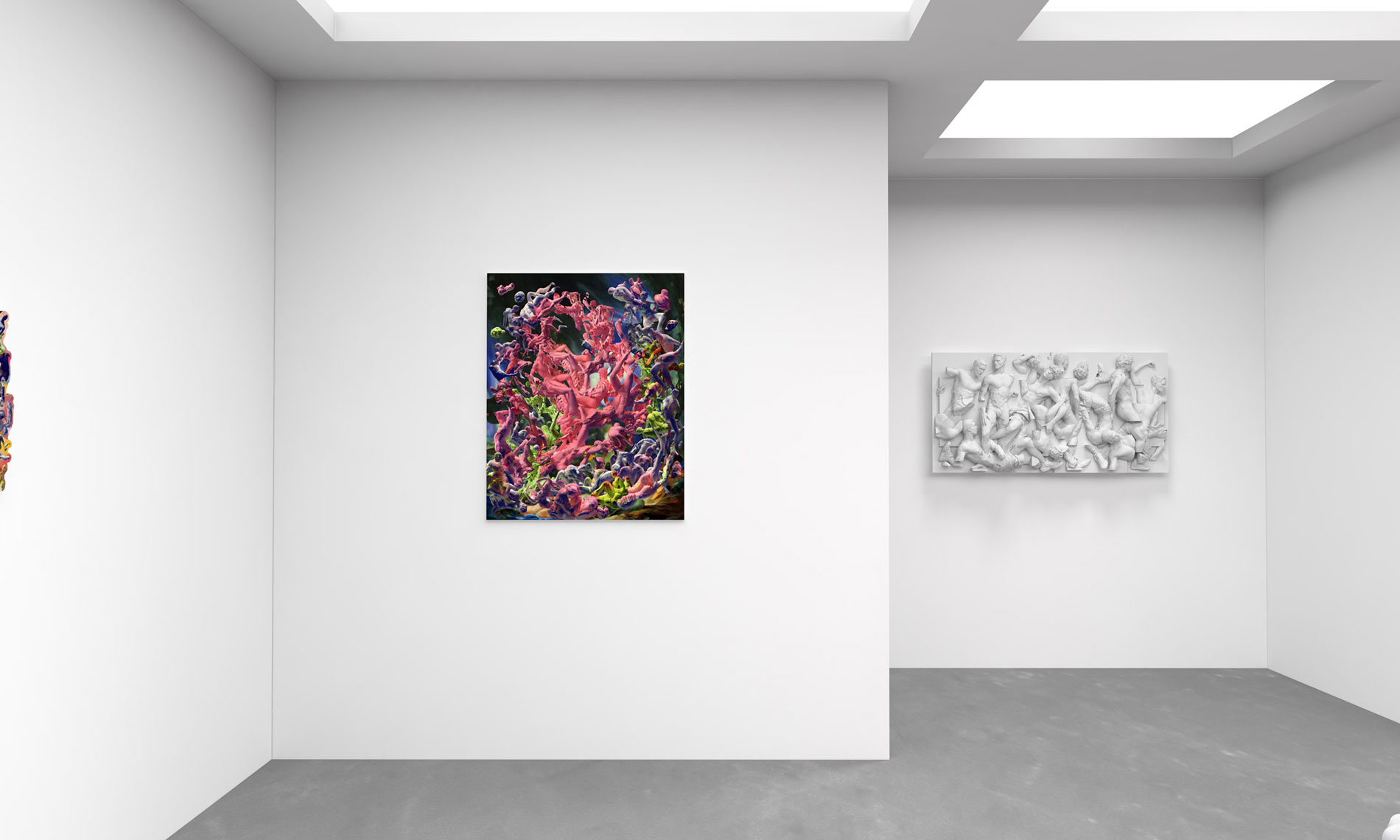 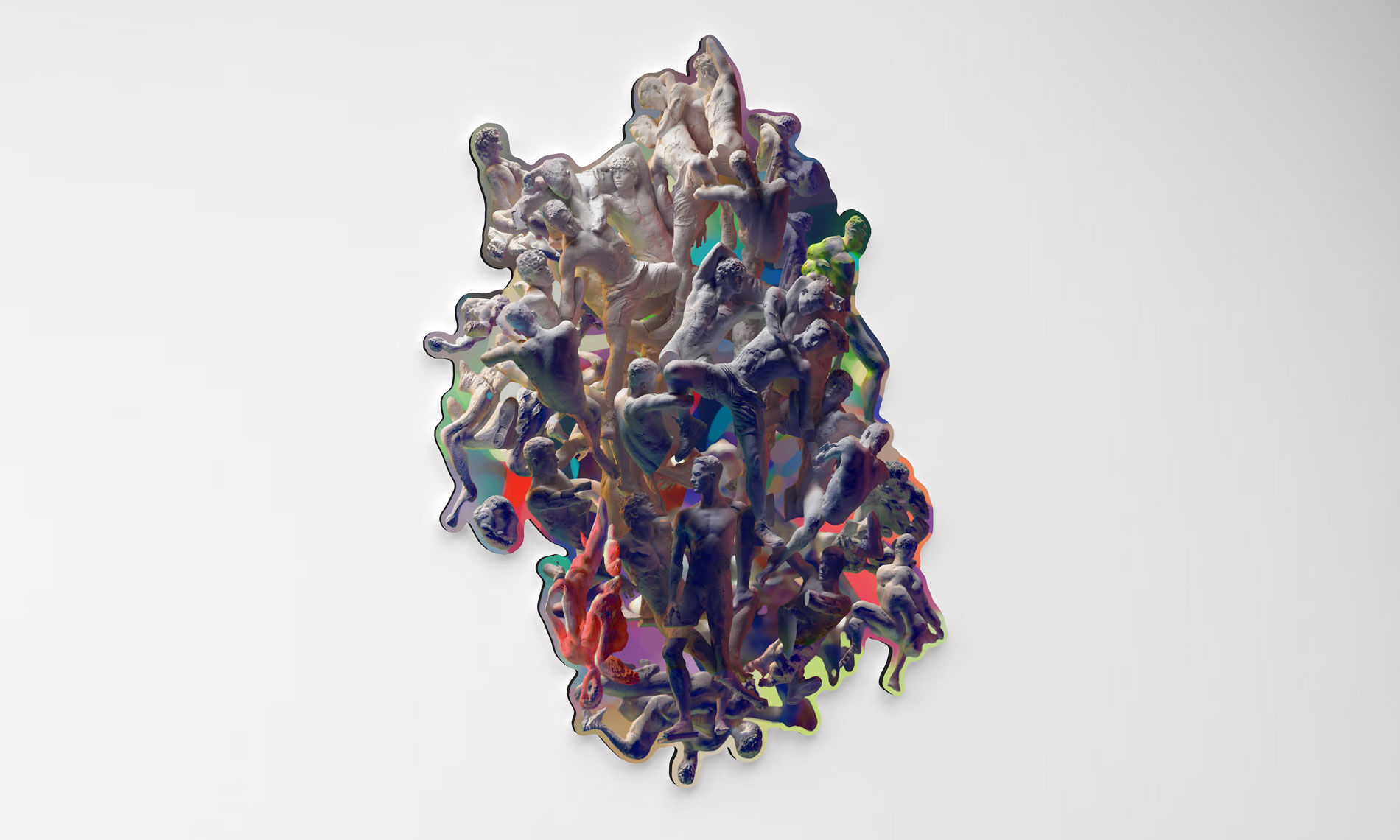 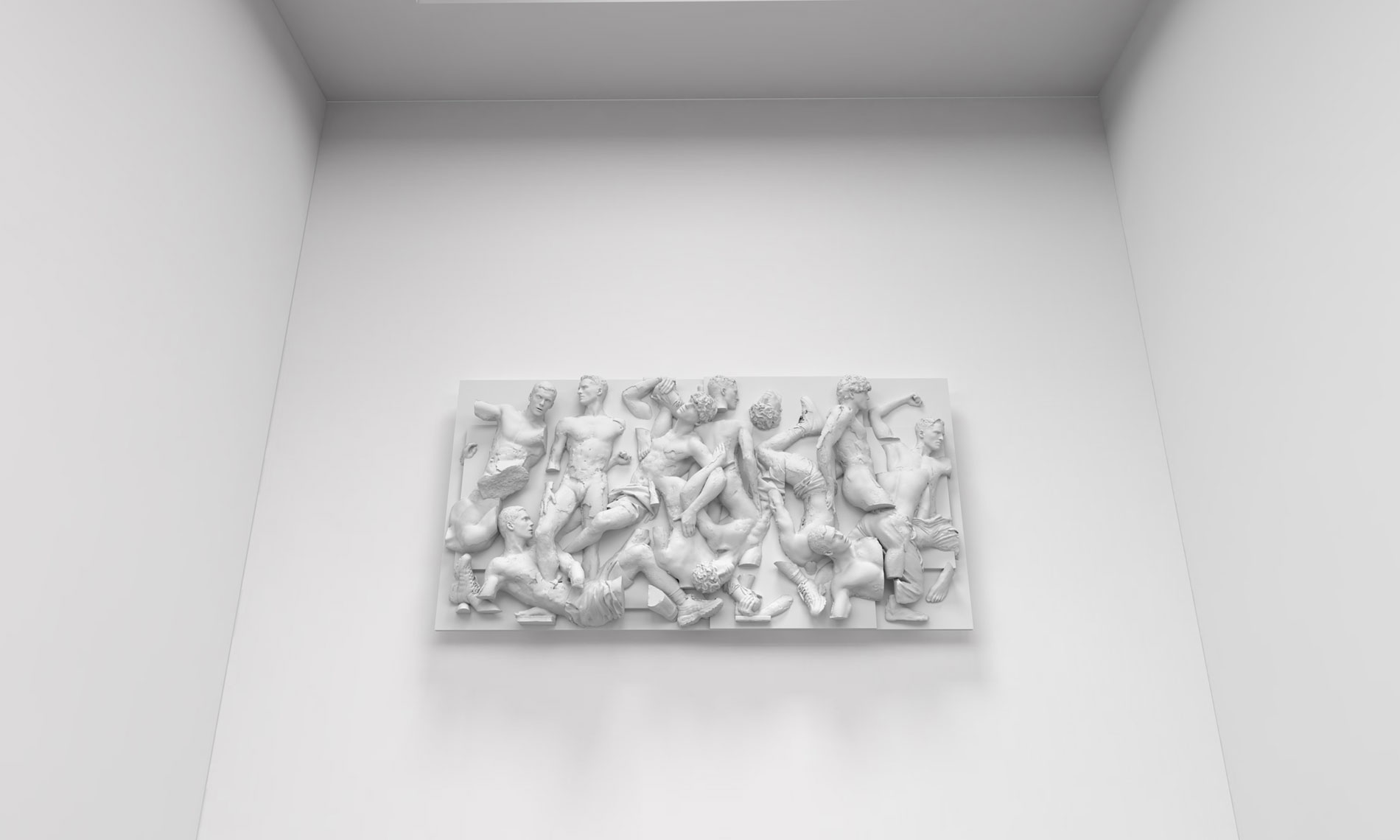 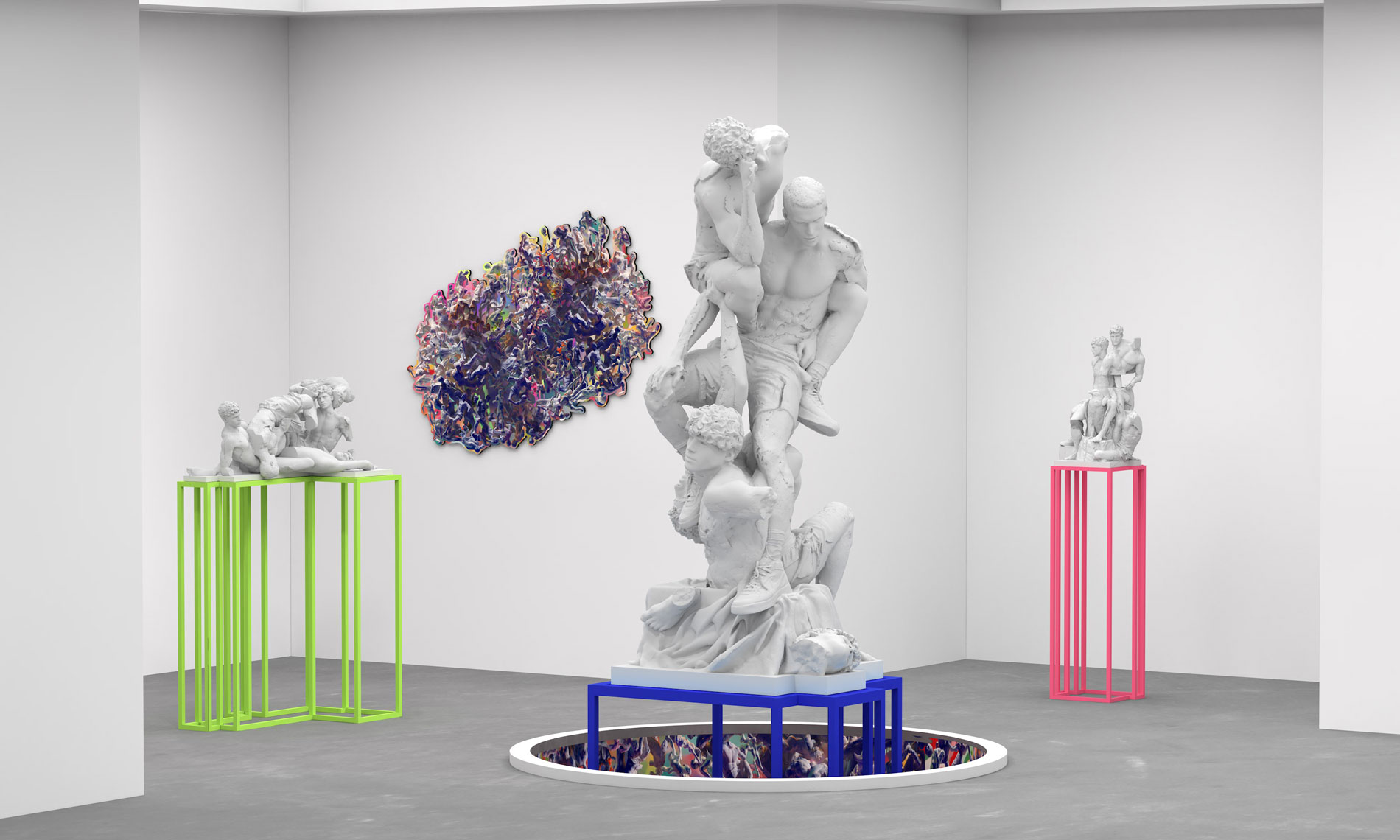 Forms under tension (Staring into the Abyss) 2020 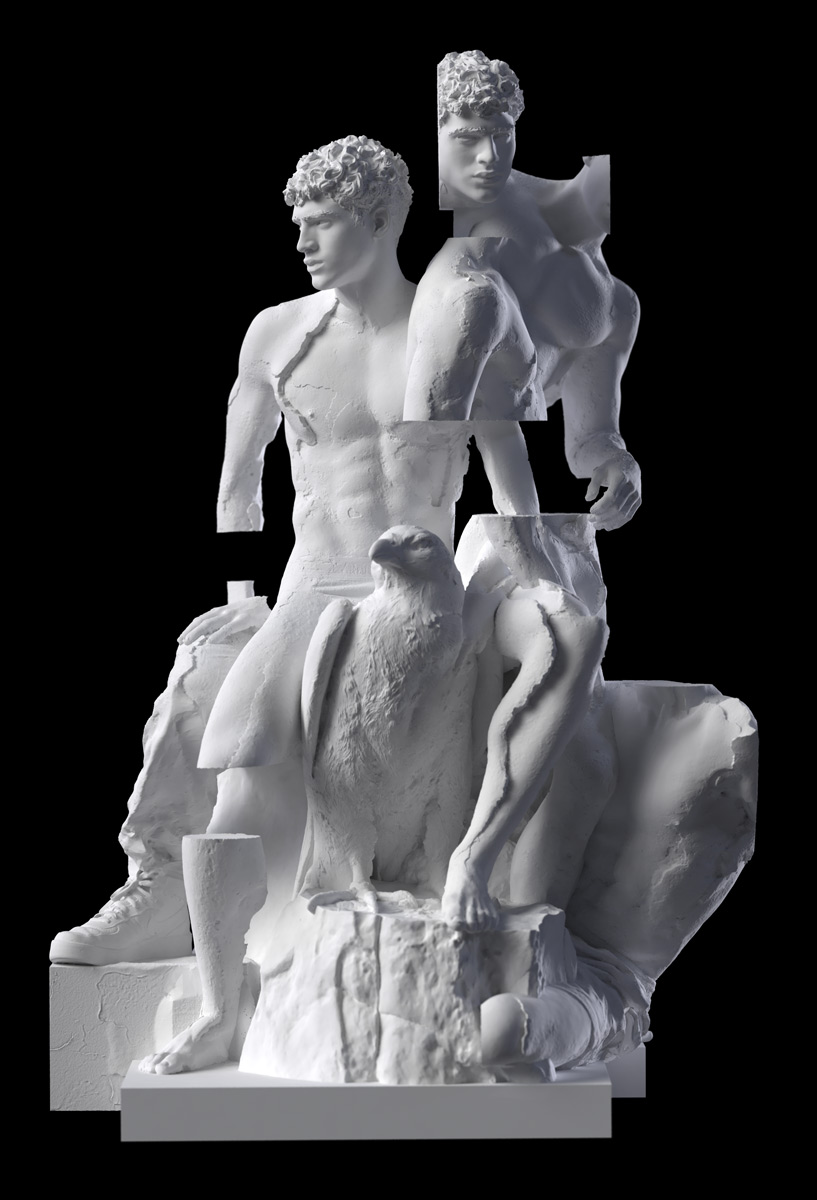 Four fragmented seated figures, a bird of prey and a rock 2020 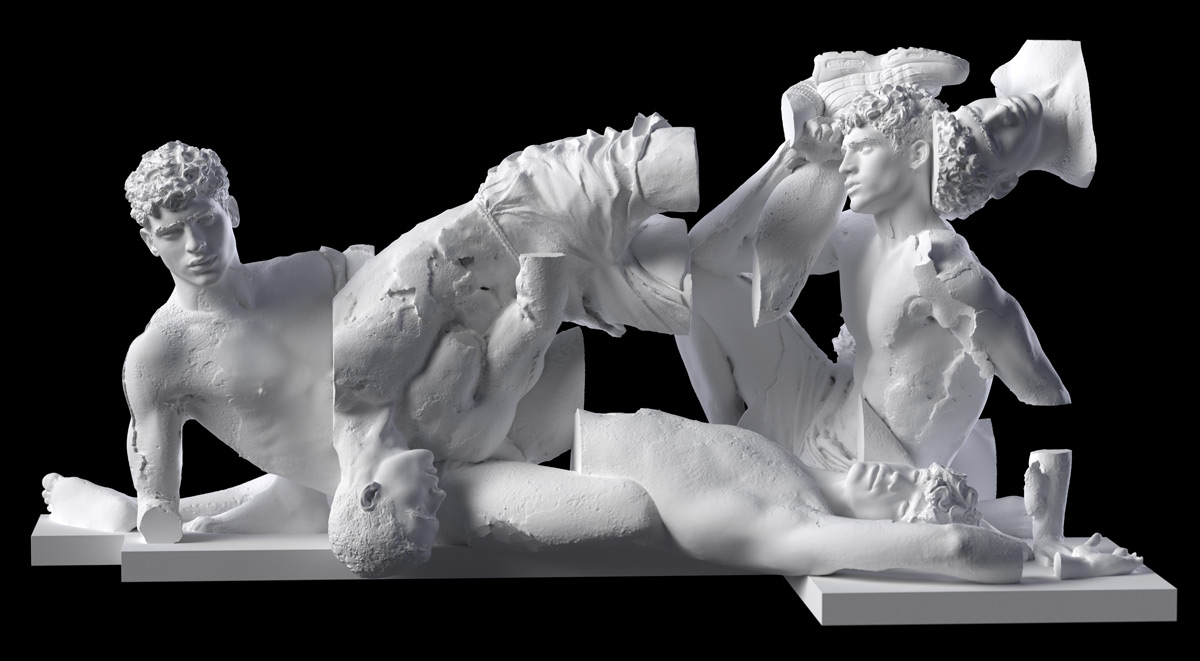 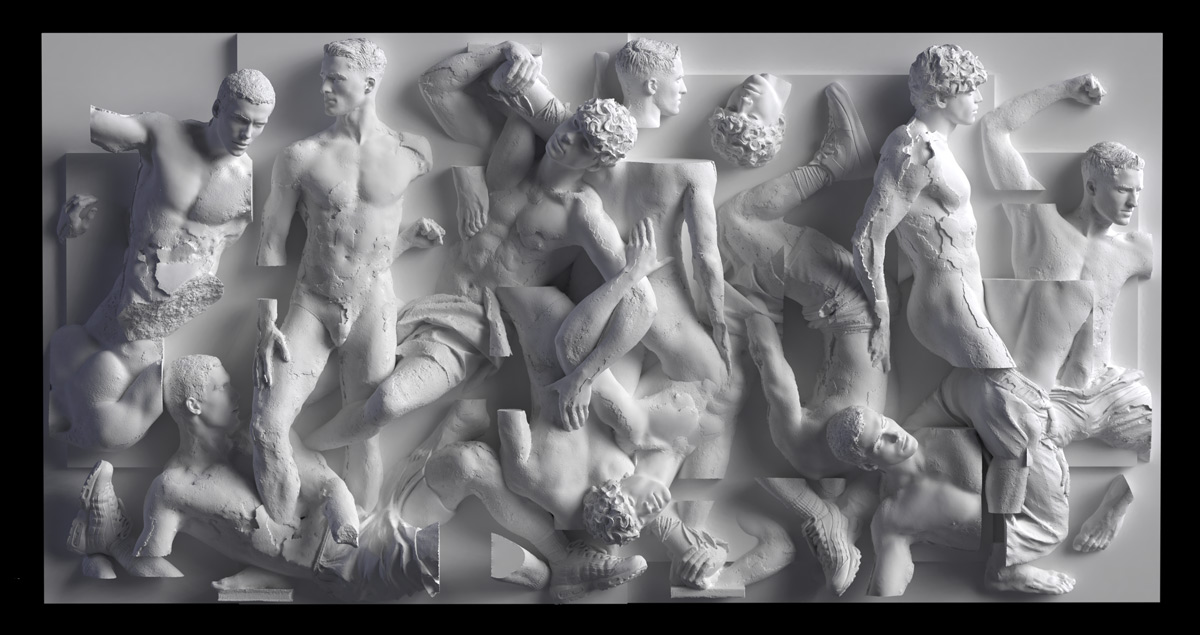 Fragmented frieze (Staring into the Abyss) 2020 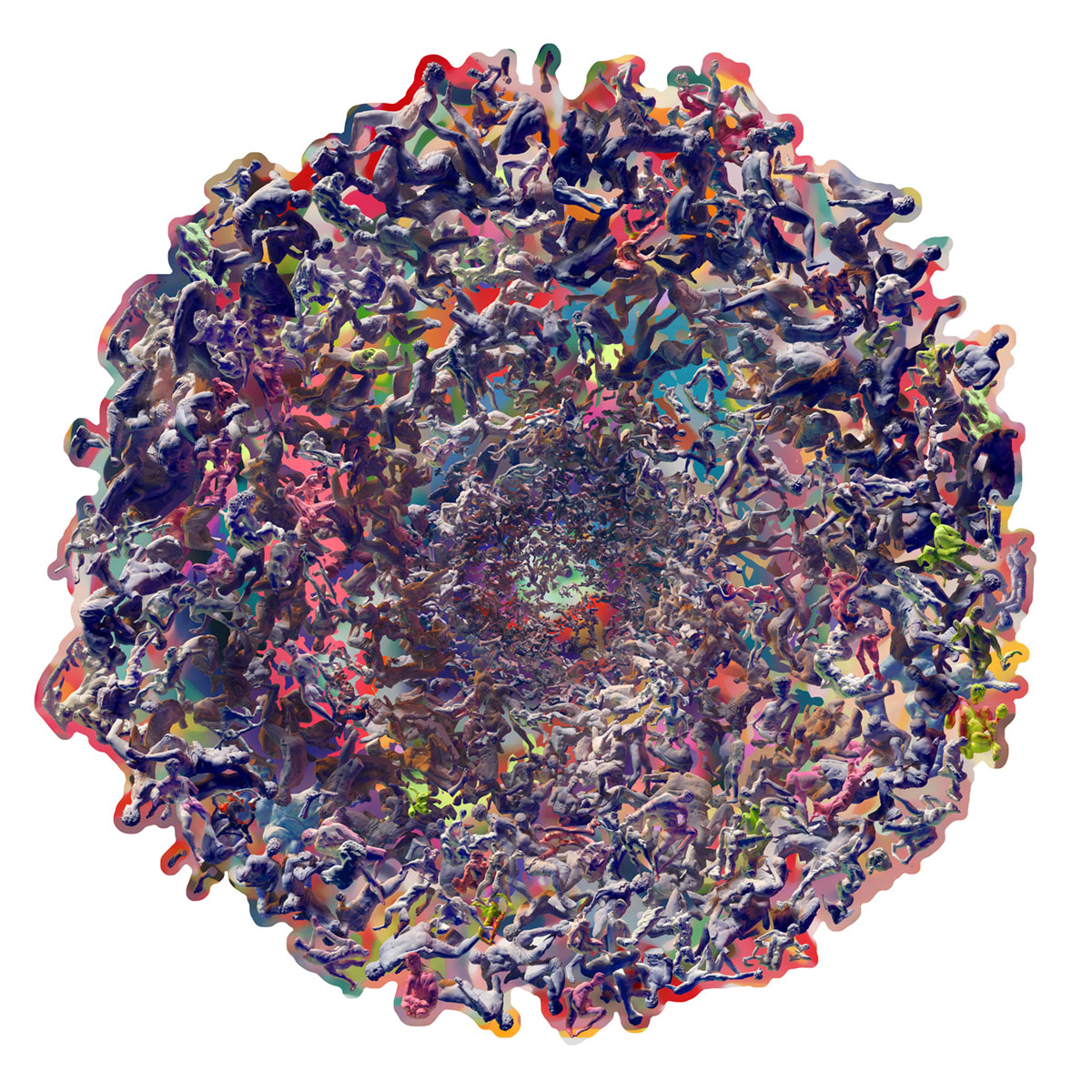 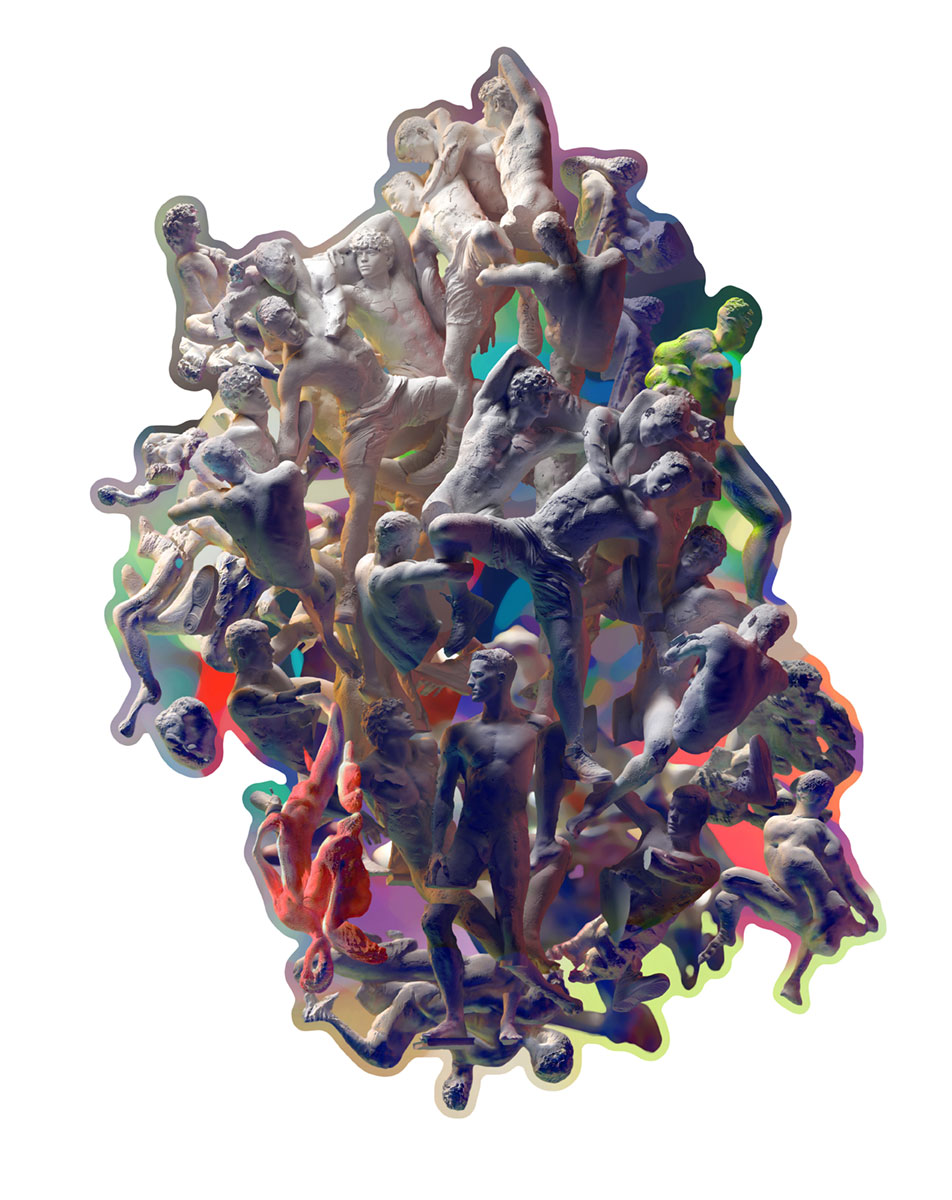 The great divide is crossed for you, by me 2020 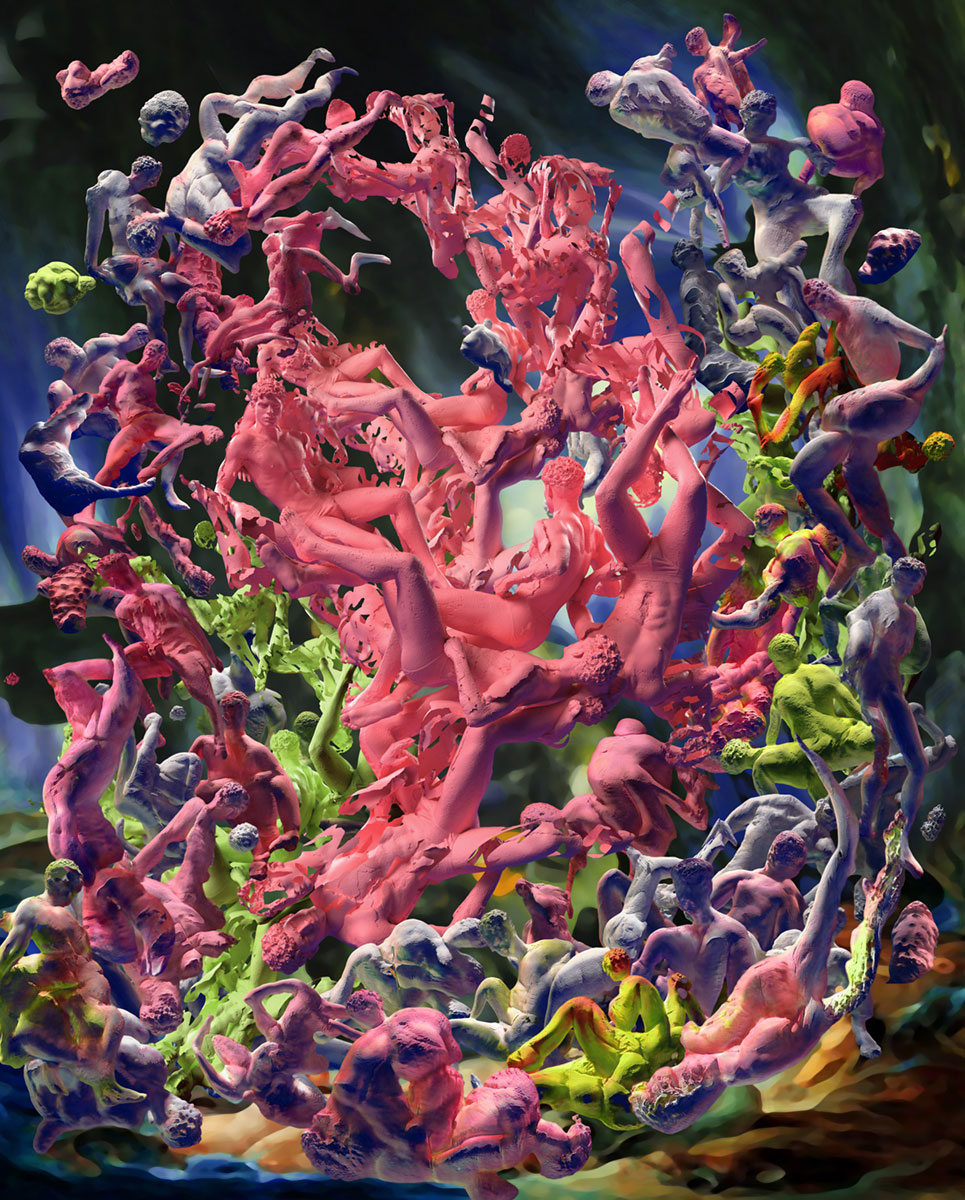 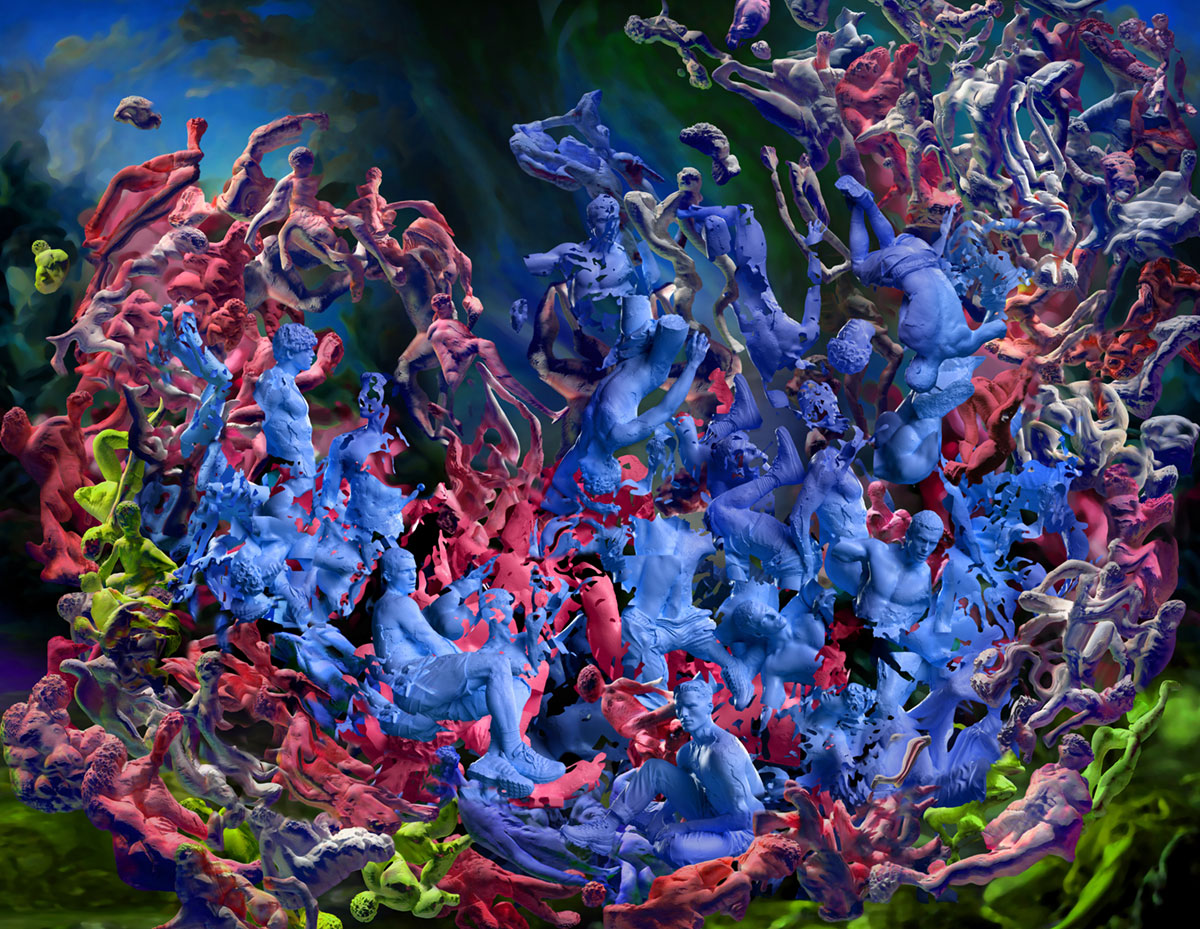 Bitten by the decorated statues, there was nothing glistening as temples do, there was chaos 2020 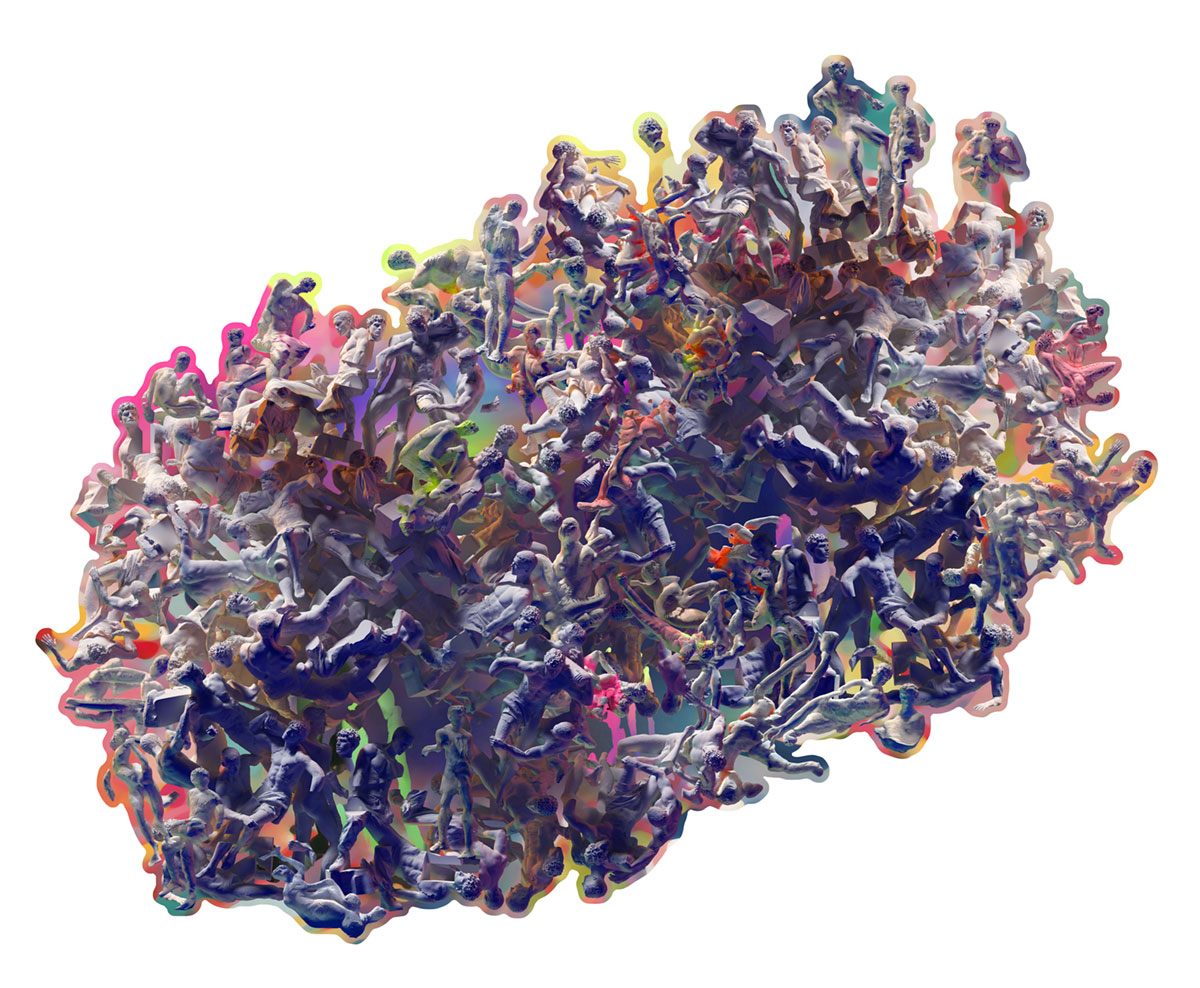 ‘Staring into the Abyss’ is now available to visit in augmented reality. The ‘Jam Sutton Studio’ app is an Augmented Reality exhibition space, available for free download on the Apple App Store for iOS and Google Play for Android devices.

For all enquiries and a catalogue of available works please contact studio@jamsutton.com